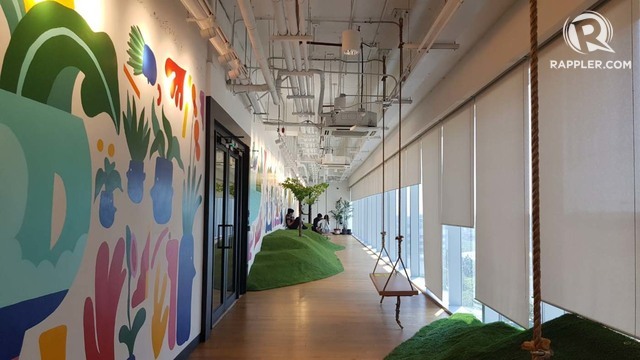 CONVENIENT. Once associated with startups, flexible workspaces have slowly become one of the leading drivers of office space demand, a trend that is expected to continue. Photo by Anna Mogato/Rappler

MANILA, Philippines – Coworking offices and flexible workspaces are usually associated with startups but this perception is changing, as the demand for short-term communal office spaces is on the rise.

A recent report by JLL showed that flexible workspaces have slowly become one of the leading drivers of office space demand, a trend that is expected to continue.

JLL Director for Research and Consultancy Janlo de los Reyes told Rappler in a chance interview on Thursday, April 11, that they are “seeing around 2,000 seats in a year in the past 3 to 5 years.”

“We’re still expecting that number to grow because a lot of new flexible workspace operators are coming into the market and they’re also aggressively expanding,” he added.

KMC Solutions legal counsel and co-founder Amanda Rufino-Carpo told Rappler that finding a temporary space is the first thing investors look for before setting up shop.

Carpo said that they began their business with guiding foreign companies through SEC registration, visas, and recruitment. Helping foreign firms look for temporary office space became second nature to the company soon after.

“We realized that space is something that any person doing business needs to juggle so we’re providing a smoother entry: a temporary office, a way to start whether that’s a virtual office or staff leasing or built-to-suit [space],” she said.

“We didn’t invent this business. It’s because we listened to what the client wanted,” Carpo added.

KMC announced earlier this week that it received the support of Singaporean private equity company ASEAN Industrial Growth Fund to fuel its expansion in and outside Metro Manila.

This website uses cookies to improve your experience while you navigate through the website. Out of these, the cookies that are categorized as necessary are stored on your browser as they are essential for the working of basic functionalities of the website. We also use third-party cookies that help us analyze and understand how you use this website. These cookies will be stored in your browser only with your consent. You also have the option to opt-out of these cookies. But opting out of some of these cookies may affect your browsing experience.
Necessary Always Enabled
Necessary cookies are absolutely essential for the website to function properly. This category only includes cookies that ensures basic functionalities and security features of the website. These cookies do not store any personal information.
Non-necessary
Any cookies that may not be particularly necessary for the website to function and is used specifically to collect user personal data via analytics, ads, other embedded contents are termed as non-necessary cookies. It is mandatory to procure user consent prior to running these cookies on your website.
SAVE & ACCEPT
0
Login